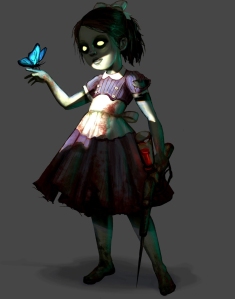 Over at the ROR blog the Sunday Writing Craft post is a Beginner’s Guide to Writing for Games. It’s a two-parter with the second half being posted on Tuesday.

And this scary little girl is one of the ‘little sisters’ from Bioshock 2. The design of the game is very retro 1930s. I love the look of this period,  everything from Art Nouveau to Art Deco. 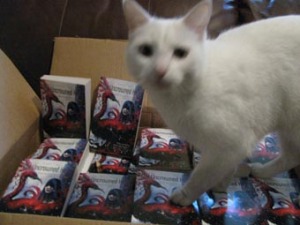 This is Sassy cat inspecting my advance copies of KRK book two.

The Uncrowned King – I love this cover

This is Sydney’s specialist spec fic bookstore, so I’m over the moon. Thanks to the guys at Galaxy! 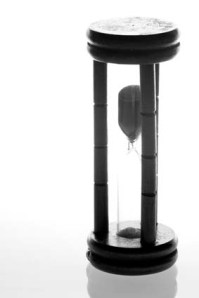 It’s Kerbside Clean up next weekend.  That’s when our council tell people to put their big rubbish out on the footpath and they come and take it away. You know how things accumulate, like that microwave that broke down, and the office chair that lost one of its wheels and tips people off at inconvenient times. Well, this is a chance to get rid of these things.

I know I should be sorting through our house, putting things into piles. Things that are rubbish and go in the bin, things that can go out in the Kerbside Cleanup, and things that we will give away to the Salvation Army.

But I would much rather be writing. Up to page 108 of the rewrite of The First T’En. If I’m not careful I could just disappear into it and not surface for a month!

So there’s a battle going on. Do I stop writing and clean up the house, or do I keep writing and hope someone else will do the cleaning for me.  (Like that would ever happen!)

How do you balance life and writing? I walk a tightrope.

Filed under Nourish the Writer, The World in all its Absurdity

Tagged as life gets in the way of writing, Nourish the Writer, The First T'En

IT Crowd, series 4, can thoroughly recommend it. 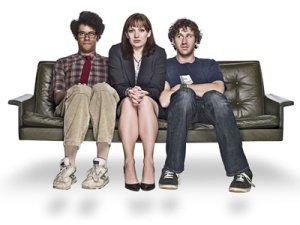 Having attended many SF conventions surrounded by people who could have stepped out of the IT Crowd, I feel quite at home watching this show.

Back at Christmas time I had a tooth out (stitches, yuk) , so what did my sons do? They put on the IT Crowd to cheer me up. It hurt to laugh, and I mean really hurt but I couldn’t stop laughing.

I laughed until I cried and had to leave the room, then I came back for more.

When Roy is helping Moss learn to deal with the bullies. Roy role plays a bully.

Moss bursts into tears. ‘It’s too real Roy, too real!’

I have days like that. We all do.  What’s your favourite line?

Filed under Fun Stuff, Genre, Movies & TV Shows, The World in all its Absurdity

Tagged as It's too real, Moss and Roy, Roy. TV Shows, The IT Crowd 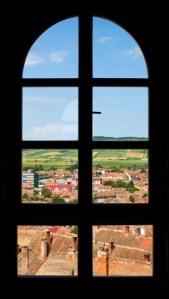 I belong to a writing group called ROR. (For background on the group, see here). Every year or so we get together to review out manuscripts and give feedback. There are 8 of us, but numbers vary depending on our families, work, deadlines etc.

There are five females and three males in ROR, it just happened that way, but this year there’ll be even numbers at the ROR retreat.

Although I don’t think of it as a ‘reatreat’ I think of it as a writing craft feast. Spending time with other people who are just as obssessed about the craft of writing as me, is heaven. I love dissecting story.

There is no point denying it, mens and women’s brains work differently. (Architect’s and trucker driver’s brains also work differently).  I have four sons, I know their brains are wired differently from mine. As a writer I don’t write for a male or female reader specifically. But I like to know that I can appeal to both genders and this is where having feedback from both genders helps. So I’m looking forward to the ROR feedback this year. (Not that I don’t always look forward to ROR).

As a writer I don’t limit myself to writing from a female View Point, I have male View Point characters, too.  One of the things I like to do is run a chunk of male VP text through the Gender Genie, to see if the genie can pick the gender of the character.

They say boys won’t read a book if the narrator is a female character. I can’t say that this bothered my sons. And I must admit that I don’t mind if the View Point character is male or female, as long as they are interesting.

I’ve deliberately written short stories where I don’t specify the gender and let the reader make up their mind.

What do you think? Does the gender of the View Point character influence how you relate to the character?

Mentoring Retreat in the Tropics

Good friend of mine, Sandy Curtis, is running a writing retreat at Kellys Beach Resort. So if you live up that way, near  the coast in central Queensland and you’d like to spend 3 days at a lovely resort with a published mentor going through your book, short story or play … 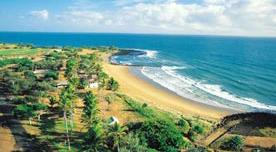 Writers retreat to the beach!

Three storytellers will each offer their unique insights into writing at a mentoring retreat at Kelly’s Beach Resort, Bargara on the coast near Bundaberg, in Queensland.
The Bundaberg based professionals will mentor emerging novelists, short story crafters and playwrights over three days from 15-17 October 2010.

Mentoring the Muse is proposed as an intensive retreat-style development program similar to iniatives like the Varuna Manuscript Development Awards in NSW or the QWC/Hachette Australia Manuscript Development Program. These have been highly successful at supporting writers to improve their work to publishable standard, resulting in numerous publishing contracts for participants.

There is nothing like getting away from family and work and concentrating on your writing in a beautiful environment with other writers, while being mentored by someone who ‘gets’ your writing!

When friends have books coming out …

I get to celebrate!

Over at the ROR blog Kylie Chan has done a post on Sustaining Plots. Since this is book six of her Dark Heaven series, she can speak with authority. She’s also doing a giveaway of ‘Hell to Heaven’. 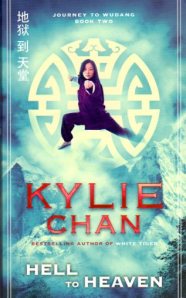